So this is where it ends. The minibus pulls to an open field of straw yellow encroaching upon shores strewn with ancient lava, and Snaefellsjokull volcano and glacier dominate the horizon.  The turistas all run down the paths at it like some great white Pied Piper, as if they had a shot at reaching its foothills in the 35 minutes we were given.

They do not reach it.

I shrug, pull the camera out, make peace with the fact that there are too many garishly bright jacketed foreigners in the field of view.  I take the picture.  Snaefellsjokull is a Mt Shasta wannabe. 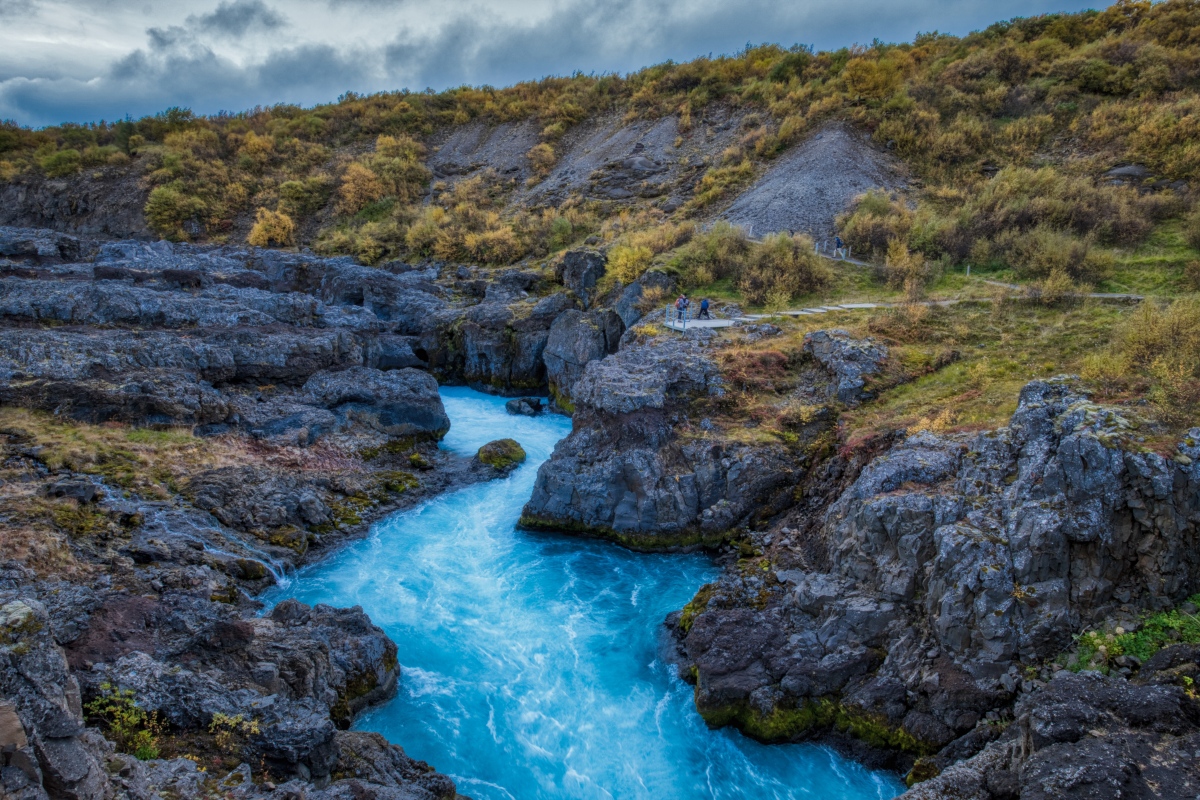 We walk walk walk along fall colored paths with short stubby native trees. Tall evergreen or birch trees in Iceland are planted anomalies designed to create a forest illusion, and in some cases in this rather exposed volcanic land, the illusion works.   Upstream of Hraunfossar, the Children’s waterfalls, the river water flows and churns into a frothy turquoise with a whipped cream top, bashing and smashing its way against jagged lava sides and probably a kayaker’s dream.  We stand over bridges, we take pictures, we do the things you do in the Icelandic fall, and the air is crisp and clear and smells like hot dogs. Oh wait, that’s the nearby cafe. Nevermind.

In the west of Iceland, a very Nordically named area of Bifrost-hmmm, sounds familiar–we mixed band of motley travelers climbed a winding set of wooden stairs until we hit the rim of Grábrók crater, whereby we were promptly greeted with a smashing gust of wind that literally bent some o’ the littler folk over, and the bigger of us became shaking kites in our parkas, leaning hard against the wind as we took one step, then another along the narrow rim.   But the views speak for themselves, and loudly.  This particular image above was taken from the gravel rim of the crater out to the surrounding area. Fall colors indeed…hellaciously beautiful.  Then, of course, everyone dashed around and back down the steps lest they be blow into the depths of the crater.  Spoilsports. Live a little! 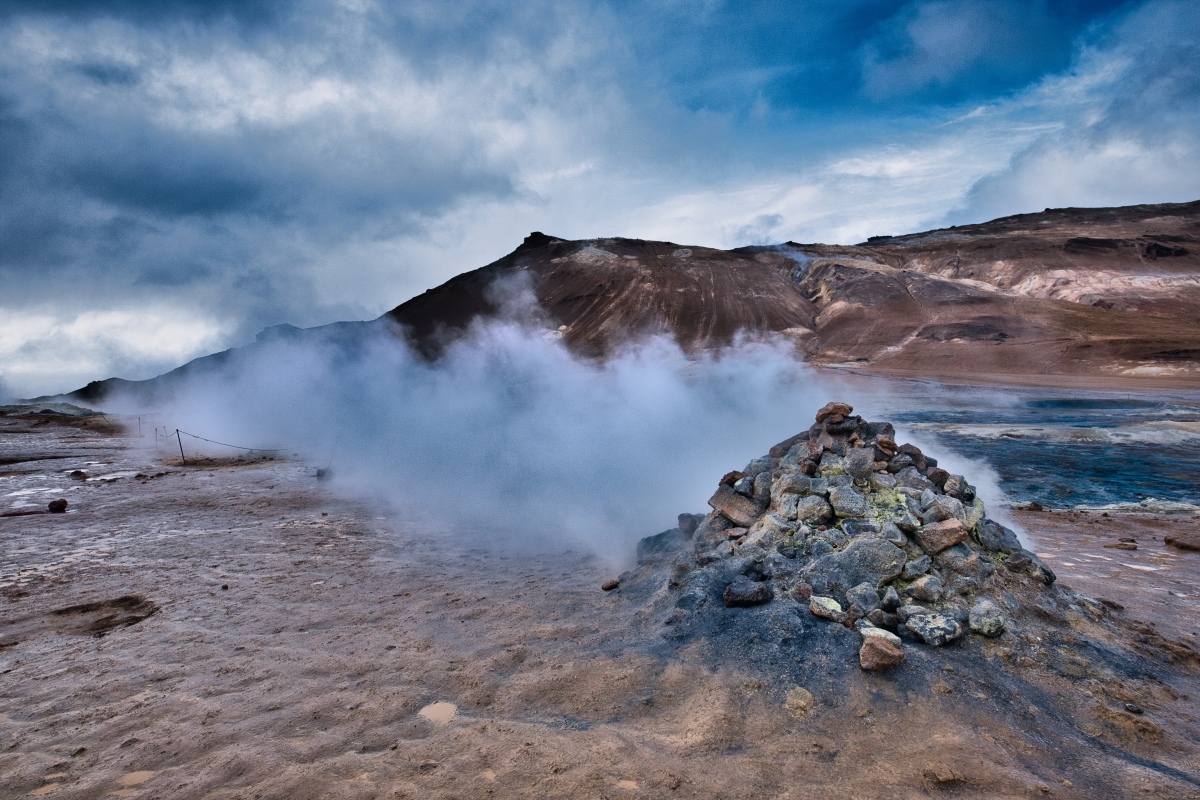 Námafjall geothermal area, Northeast Iceland, vents steaming out of every crease in the land, indigo and blue bubbling mud ponds and bathes. That pile of rocks in the forefront–there were many–was hissing like a snake and the gusts were so hard, the steam blew out sideways and not up.  An overwhelming stench of sulfur.  Just over that steaming red Martian looking hill lies the Mývatn Nature Baths….an unevenly heated 1 acre pool that the locals hit up cheerfully and have since the time of the Vikings, knowing the entire place could go up any time this angry earth feels like it, but hey…hot spring plus cool pool plunge equals “less inflammation,” so say the locals.

We strapped on the crampons, swung the ice axes, ambled up Falljokull, the lava dirt outlet glacier of the mighty Vatnajökull glacier and looked deep into the valley of the mountain’s throat, its tiny meadow-like green patch that would make for difficult golf, the slopes in the far background that seemed almost Shangri-la, with a kind of mist that hung over them in the on an off sprinkle of rain.  It was a contrast in earthtones, so I snapped it.   Think I’m happy.   “The glacier melts are always cycling forward and back,” said our UK glacier guide, “but in the past 5 years since I’ve been leading these hikes, they’re receding much much faster than any of us have ever seen before.” He paused, nimbly avoiding the hot stone topic of why.  “It’s kind of sad, really.”   You have to be here, in Iceland, in the Himalayas, in Tanzania–anywhere outside–and be surrounded on all sides by this kind of landscape to feel dread at the possibility that it might slip away in ours or our children’s lifetime.

Deceptive, I was, tagging this picture with things like “waterfall” when, in fact, it’s clearly L’il House On the Prairie. But my point–and I do have one–is that sometimes when you’re visiting Iceland focused on waterfalls, you should turn around a bit a look behind you. The waterfall in this case was Seljalandsfoss in southern Iceland, the infamous falling water you can walk behind. I waited my turn in a long muddy line of tourists dressed in bright unnatural hues and and getting soaked. When I walked behind the falls, I looked out and saw this lonely farmhouse, looking like an obscured 19th century oil painting beyond the moving water. And I saw the odd, tall grass. And in the very far distance I saw glaciers and knew I wasn’t in Kansas.

Litlanesfoss is oft overlooked by tourists intent on hiking 3km up to the mighty Hengifoss at the top, but it shouldn’t really, what all with those mighty basalt columns framing the lower waterfall. Honestly, they kinda look like blue whale baleen to me, but I’ve been accused of having a hyperactive imagination. Anyhow, the weather poured random rain on us, so getting a snap of this l’il guy was an exercise in cover-wipe-shoot-wipe again.

The Icelandic language is the closest Nordic language to the old Norse of the Viking, as the other Scandinavian countries have customized it to nigh unrecognizable. Fine. We elevate and climb to the top of the unpronounceable church Hallgrímskirkja, we look out on the houses of Reyjkavik, the capital city that holds two thirds of Iceland’s entire population. I pull out the kind of gigantic lens that makes everyone in the church tower raise their eyebrows, jab it through the narrow slot between stone columns, and I flatten the vivid colored houses that I can only assume the Icelanders paint to brighten spirits in lengthy winters with 4 hours of daylight. Mission accomplished.

The title of today’s blogpost refers to the innate modesty of the lovely Scottish people, and indeed the UK in general;  though Glasgow is a beautiful fall colored city with its muted cinnamon, red, and yellow bricks soot stained by centuries and often rehabilitated for the 21st century by modern neon signs and decor, the vestiges of Gothic religion dominate its architecture, its ruins, its iconic locations, and ultimately the feeling that any good thing that inspires passion ought to be tempered back down to reality, lest it be crushed under its unassuming ambitions.

We are day 2 wandering in Glasgow after a lovely rainy afternoon with relatives yesterday. I shuddered at taking the hop on, hop off boss, given my general eye rolling experiences back home in San Francisco with such things, but it proved to be an efficient way to see the city and decide where to go, given that we are only here a weekend. Glasgow city & west end feel largely San Francisco sized, all things are walking distances, there are lovely cobblestone and brick promenades all over the place, and Glaswegians are on the alert to step outside in a jiffy if there’s a break in the clouds and the sun comes out.

The picture today was on my way walking to Glasgow Cathedral, a reminder there are still bits of 1800’s buildings that will be NOT be preserved for the ages. They’ll eventually be knocked down, modernized, replaced with new things. That’s Glasgow’s reinvention of itself, and the city holds a fond place in my heart for this trip and a return; there’s far too much to do here than a weekend allows.

The bus travels through the winding glen above Rannock More, on our way to Glencoe, where our driver cheerfully sits on a granite rock and tells us another tragedy in Scottish history, a rather horrific massacre in 1692. Let’s just say, invoking “highland Hospitality” would give these village folks more than a moment’s pause.

In any case, the Ice Age carved beautiful miracles here, grooved green slopes beneath the continuing blue skies.  If you look closely you’ll see the triple tier waterfall midway up the slope, and the folks who live in that white house at the foothills near a creek at the end of a windy dirt road…wait, do I need to say more? It’s a fairytale land, so I’ll let it lie.