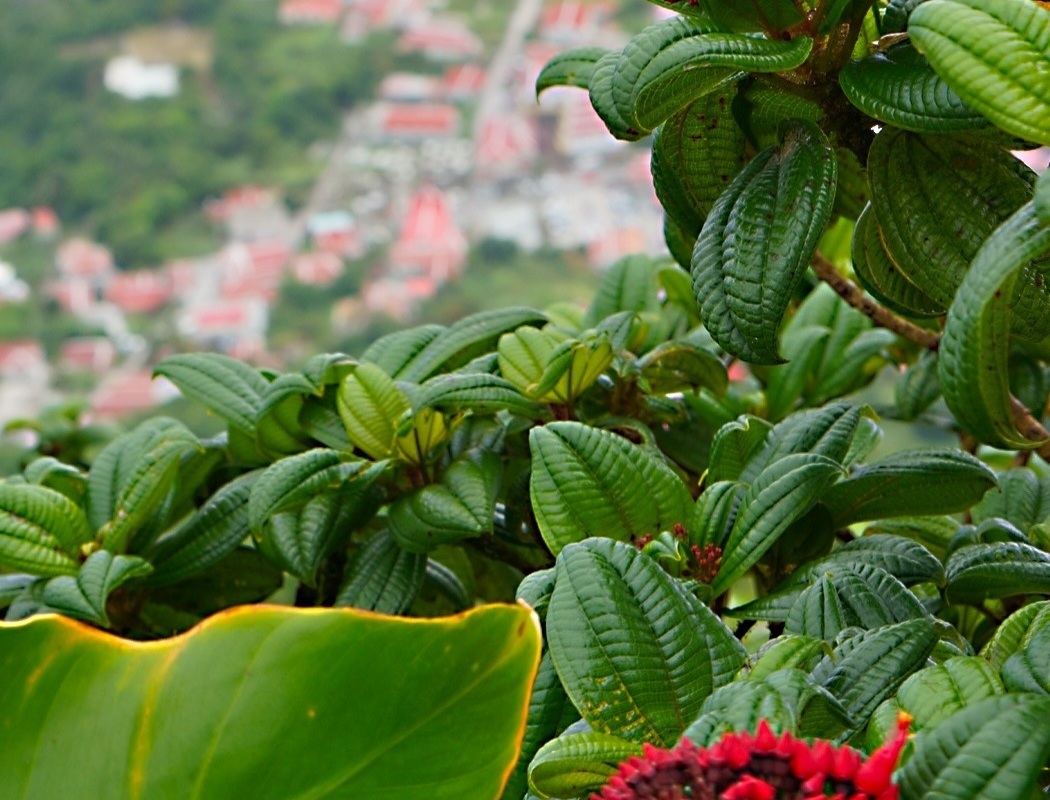 Saba Day
This past Friday was the 37th Saba Day, an analog to the US July 4th holiday, albeit largely ceremonial in its origin, as Saba has been tied to the Netherlands in one form or fashion since 1816. I bopped down to The Bottom, where a drum corps of local teens played beneath an orange tent next to a newly opened cultural center for the island, replete with articulate, nattily dressed dignitaries from surrounding Dutch islands–St Maarten, Statia, Bonaire, St. Kitts and Nevis. Of course, this was the first day I forgot to bring my camera, and there were some truly excellent faces among the crowd. 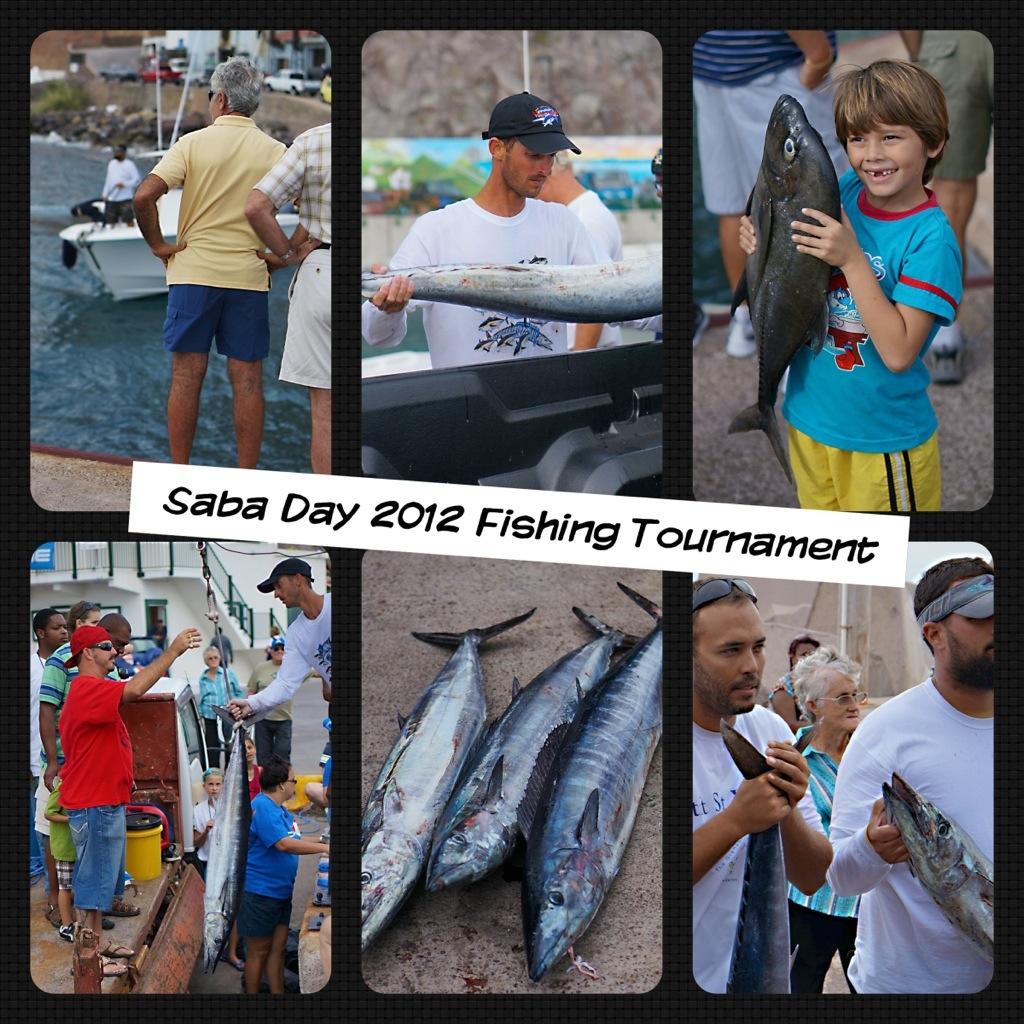 For consolation, I brought my camera back for the annual Wahoo tournament later in the day down in Fort Bay (the 80 ft pier that is the only way to get to Saba by boat). It’s a big deal, as other island fisherman boated 2 hrs through choppy six foot swells just to get here, and another several hours fishing. Waiting for each boat to come in was a ritual, as the concrete pier was lined with folks eager to help offload the boat to the truck that carried the fish to the weighing hook. 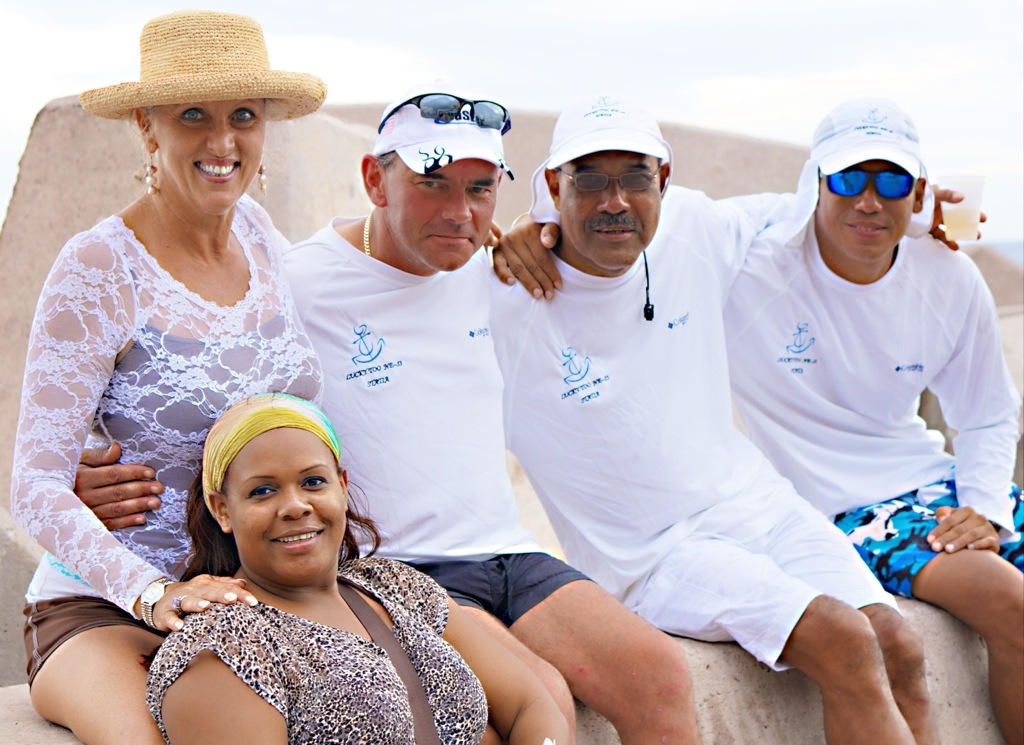 This group of three Statian fellows had the tiniest boat, caught 3 barracudas and had to throw them back, so they came up nada for their 6-8hrs investment. Michael, furthest on the left here,  confessed to be “scared” most of the morning, as the waves were quite a bit higher than the draft of their boat, despite ultimately having  faith in William (far right), the captain. My landlady/wild pal Tricia is also here, dressed up in her hat and having a grand old time, while her husband Michael (yellow shirt in the fish tournament collage above) bargained with various fisherman to see if he could get fresh mahi or wahoo for that night’s meal at Brigadoon.
Flowers 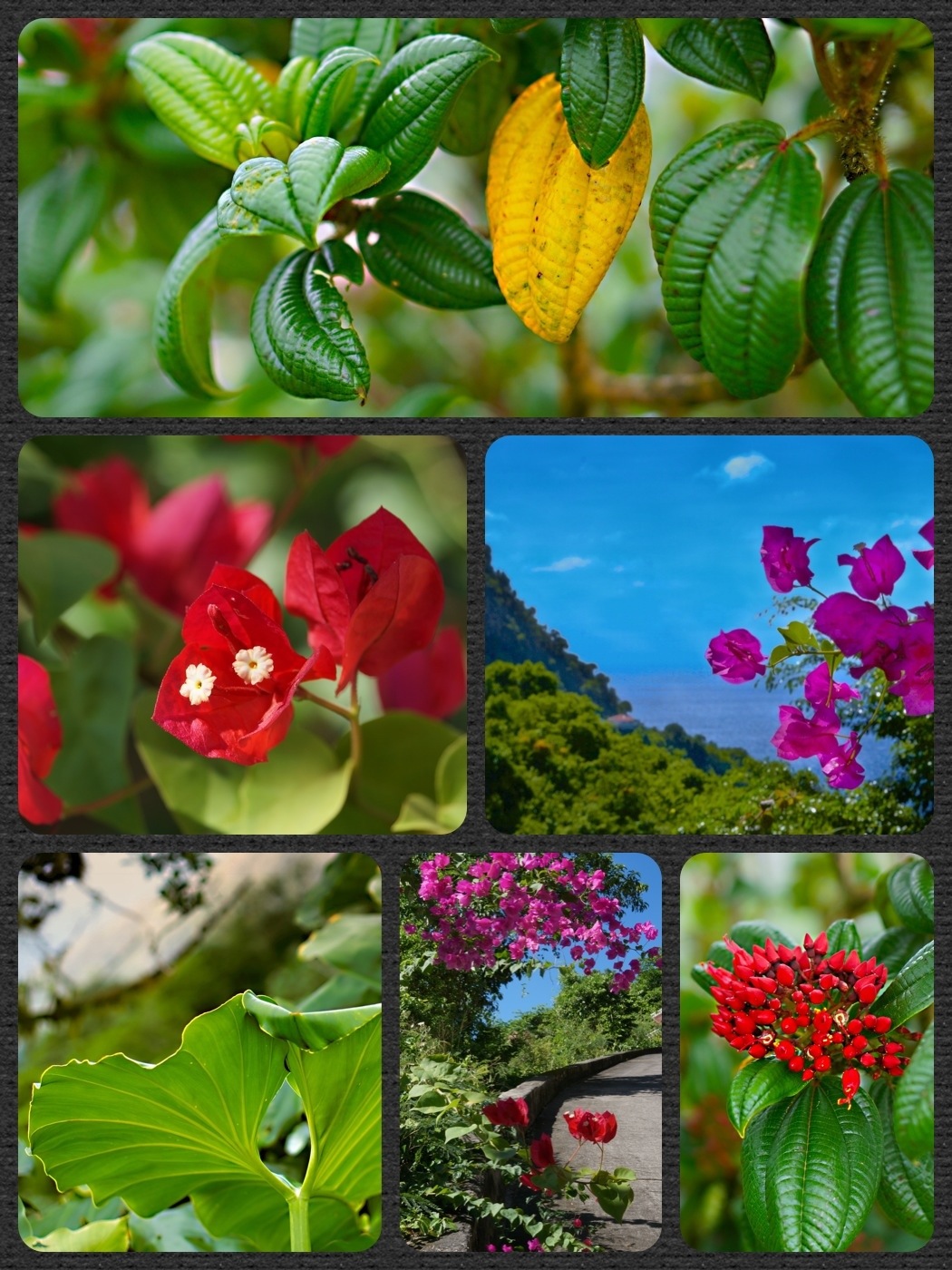 Vistas
More vista views: IMHO, there are very few, if any, angles or views of this island that don’t make me stop and cherish what I’m seeing. 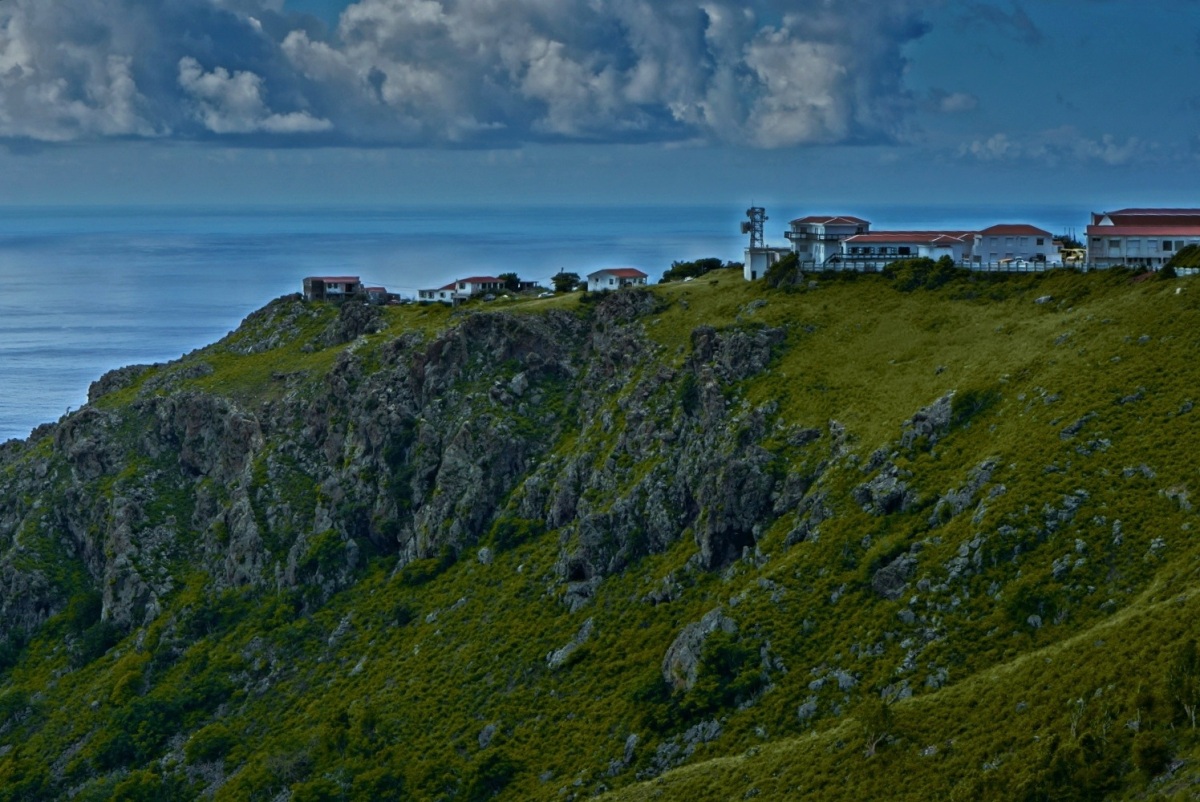 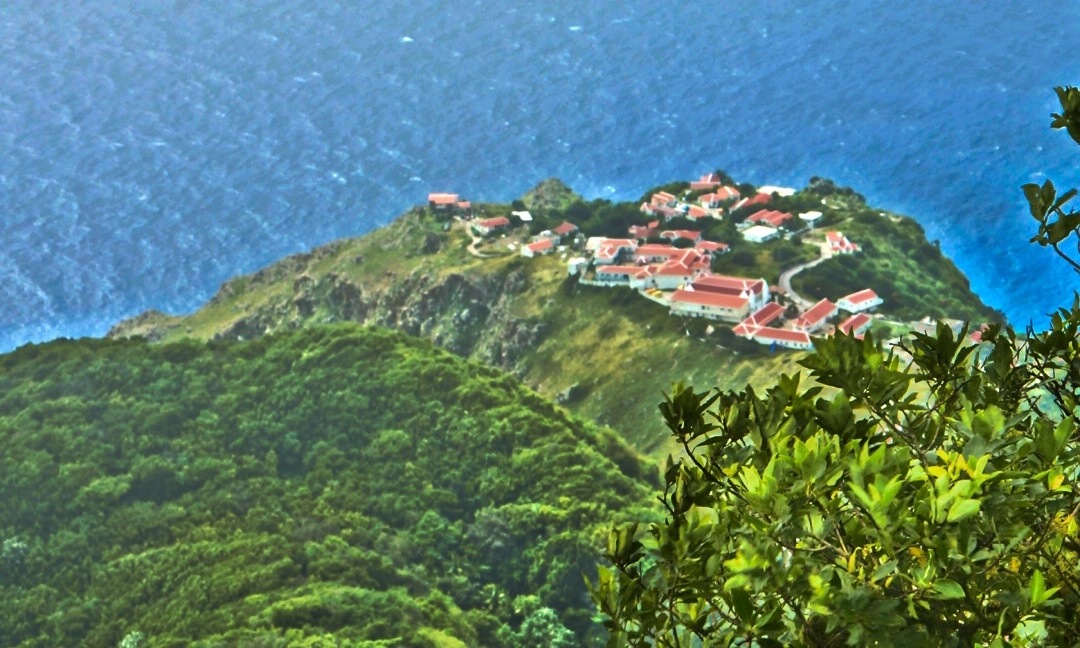 First pic above is a side view of St. John’s flat where my cottage is to show the cliff heights, and below it, a more painterly picture of St. John’s looking down from the top of Mt Scenery (2877 feet), the island’s highest hike, which I finally managed yesterday. 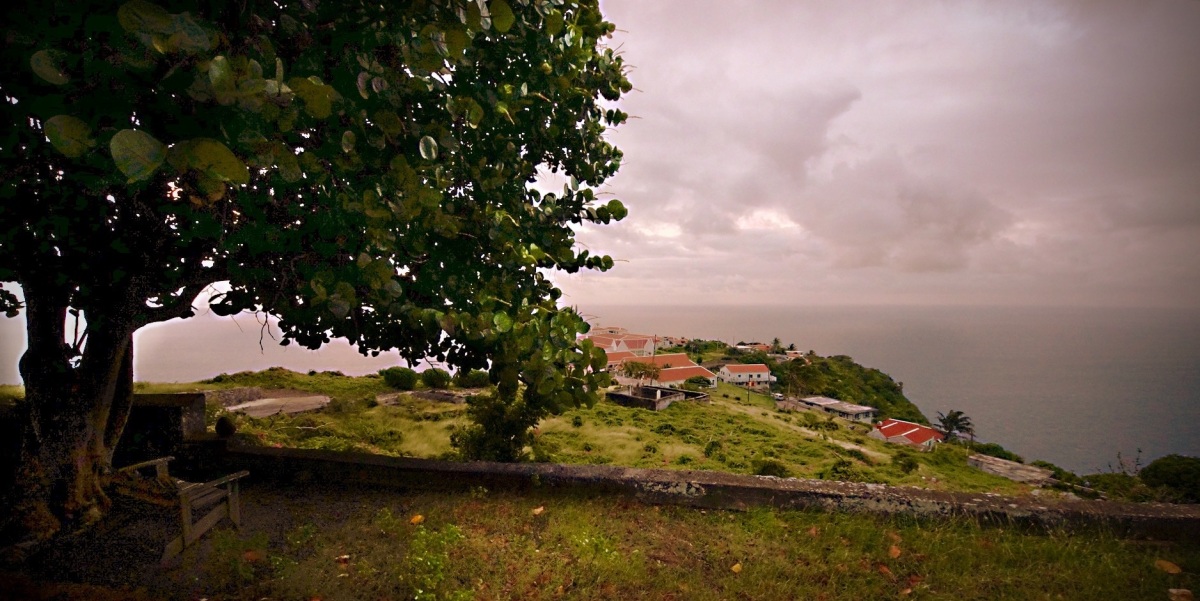 A stormy morning view from my cottage. It’s high season here, and that also means precious rain. More on Saba’s “gold from the sky” later. 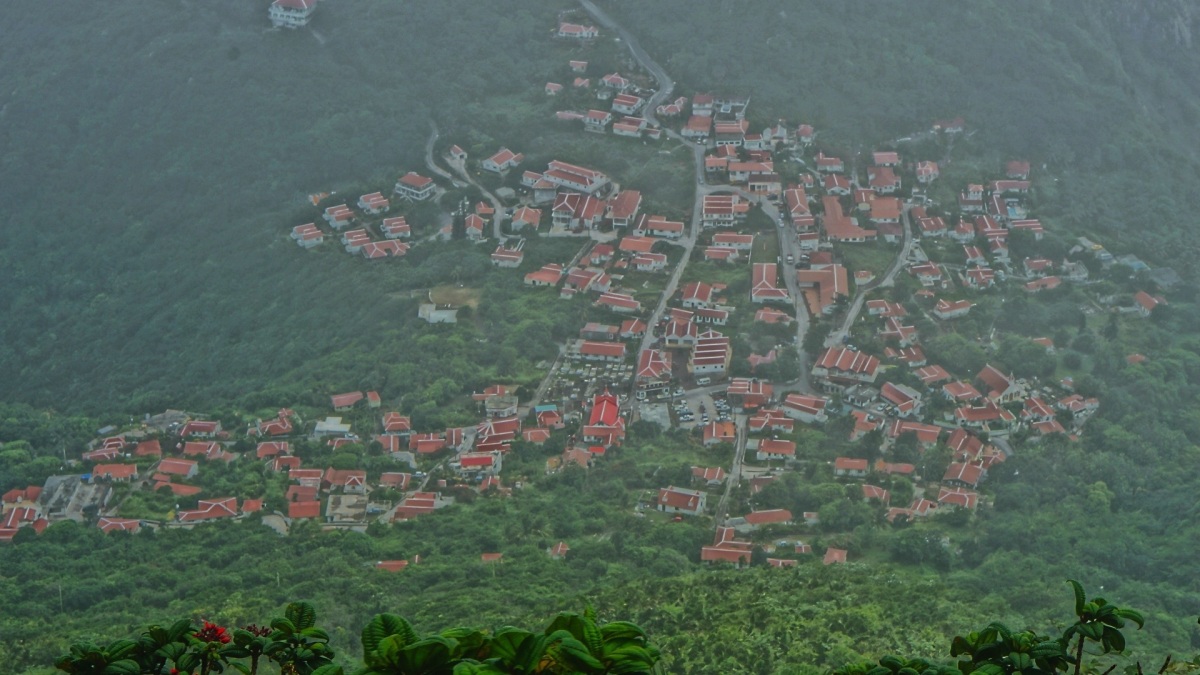 A picture of Windwardside from the top of Mt Scenery; the haziness is a King Kong island fog blowing past where I’m looking down from. 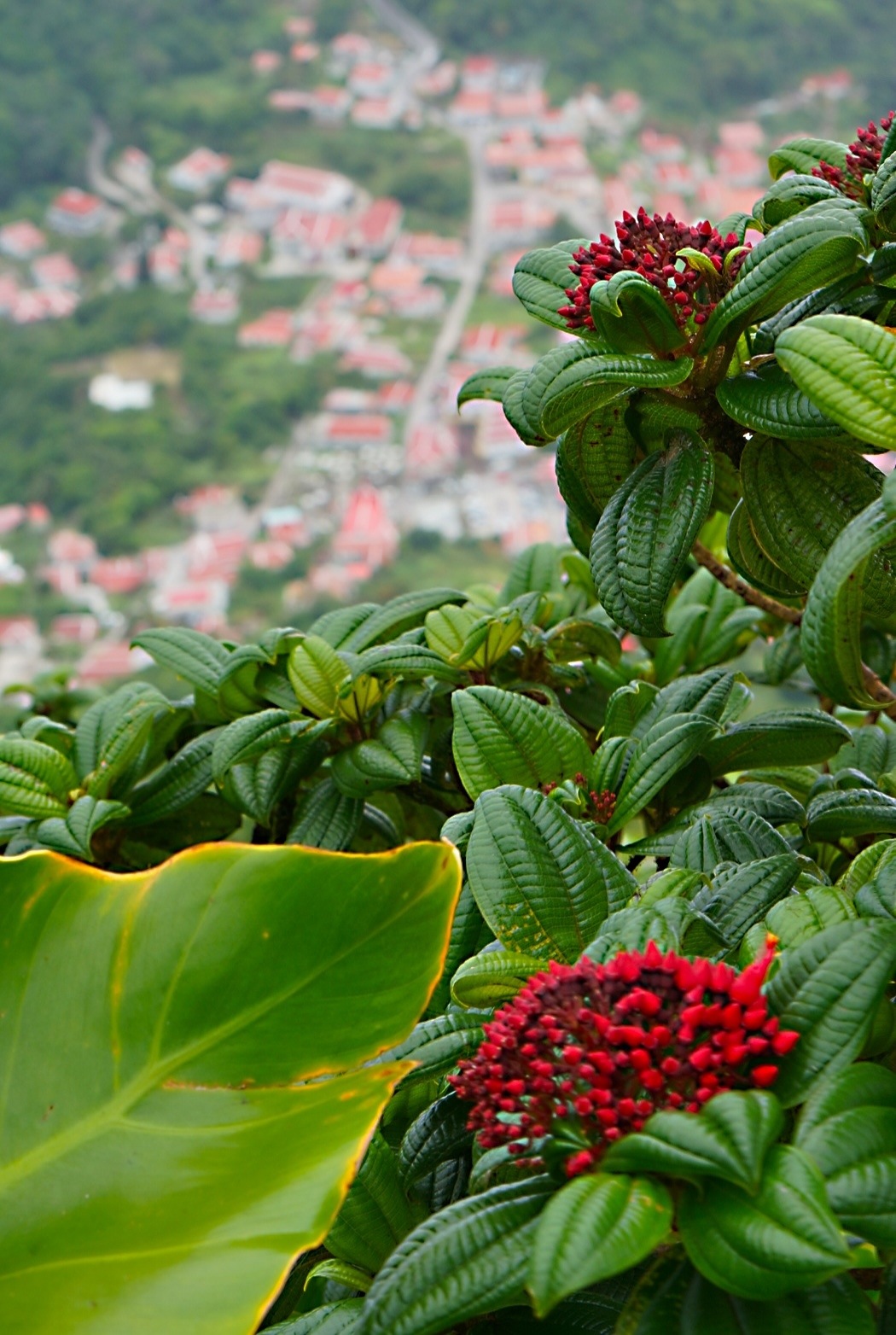 Flowers on high gazing down on Windwardside

Preamble:  Saba is an unbelievably peaceful island;  The Unspoiled Queen, as her locals aptly proclaim.  Major crime simply doesn’t happen here, or hasn’t in many many years, doors generally stay unlocked, everyone waves and says high,  hitchhiking is legal and friendly locals have stopped and waved me aboard for a ride as they see me walking the roads every day.  So night or day,  folks don’t ever feel “unsafe” here, as everyone knows everyone.  It’s Mayberry in the Caribbean, truly.

All that said,  petty theft happens from time to time. I’m Hawaiian in roots and heart, so the personal nature of island politics, personalities, and drama as happen here on Saba from time to time are not unknown to me. They just don’t usually happen the second day I’m here. 420 friendly notwithstanding, there are a couple folks on the island who are into more problematic drugs..e.g. crack, and everyone on the island knows who they are. Tricia had warned me that she had strong circumstantial evidence to believe a fellow named Cisco had swiped the camera of my cottage’s former tenant, and I should keep an eye out. Lo and behold, my first night in the cottage, the wind blowing hard outside, I heard a knock at 9:30pm. I opened the door, and a skinny dark face with ruined teeth stared back at me, a wool cap covering what looked to be rasta locks. I guessed he might be Cisco, though not sure.

The door frames of the cottage are about 5’10”, so I pretty much consume the space, if ya know what I mean, so I didn’t feel much apprehension; more curiosity.

“Is the lady still here?” he said.

I assumed he was talking about Else, the former tenant. “No,” I said, “She left last week. But I’m here now.”

He mumbled something I couldn’t understand, and disappeared into the night. Weird, right?

More to come in part 4 in a later post.